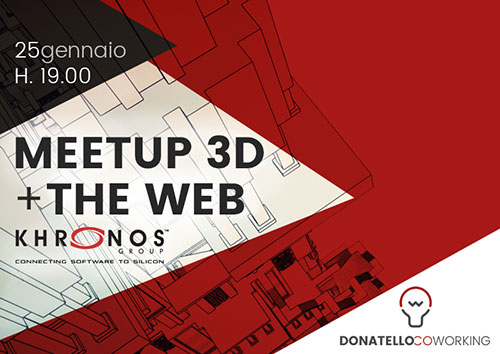 Wednesday, 25 January 2017 Donatello Coworking in Milan hosted the Meetup Meetup “3D + The Web”. The event was organized by Khronos Chapters Milan, local Khronos APIs user group that meet periodically (virtually or in person) to expand their knowledge of Khronos APIs, share experiences, help each other to grasp the challenges and socialize with colleagues that share common interests. Each Chapter traces its path and organizes the activities according to the interests of its members, managing independently social media feeds, blogs, and organizing events. The meetup that took place at the Donatello Coworking location for events di Donatello Coworking location for events was entirely dedicated to Unity, the reference game engine to develop titles on iOS / Android / consoles. The meeting also focused on the theme “interactive web apps and how to perform through WebGL Unity”.

Special Guest of the evening hosted by Space Coworking Donatello, Marco Trivellato, Field Engeneer of Unity Technologies. Marco, who arrived directly from London for the occasion, is a point of reference in this field, engaged in the video game industry since 1999 in Italy, Canada and the UK as a programmer for companies such as Milestone, Electronic Arts and Next Level Games as well as participating in projects such as FIFA, Fight Night 3 and Capitain America: Super Soldiers. Recently Marco Trivellato has contributed to the development of Unity, devoting particular attention to support for WebGL Unity.

The Meetup and location

Held in the events hall of the workplace in Via Donatello 30 in Milan and followed by a delicious buffet, the event allowed participants to discover and learn all about the world of Unity WebGL directly from the voice and experience of Marco Trivellato, highlighting the differences and advantages compared to other technologies used in the development of interactive web apps and games. The meeting provided an opportunity to deepen the knowledge of and optimize WebGL Unity projects, focusing on key aspects such as memory, graphics and more.Even the location was not chosen by chance. Donatello Coworking Milano provides freelancers and digital professionals with wide spaces equipped with modern and leading-edge technology in order to promote networking, sharing of ideas and know-how. Following the success of the Khronos Milano meetup, the Milanese coworking is preparing to welcome new events and communities in a young, dynamic and always future-oriented environment.